11 months after his rescue, Ardito can finally join other donkeys and say goodbye to loneliness.

Adding a donkey to a group is not easy. At our sanctuary, donkeys are divided according to age and size; inside each group, other smaller groups are formed, with well-defined hierarchies and relationship, which new members can mess up.

Ardito is a giant, yet delicate donkey. We had to exclude the group where other big donkeys live, because there are some leading pugnacious males. So, where to put him?

The answer was opposite his stable: the Pufulet group, where live donkeys with respiratory diseases and the only stallions of our shelter, Pippo and Galileo (they cannot be neutered because of malformations which increase the risks of surgery).

Some days ago, we moved Ardito into the paddock nearby, so he and the other donkeys had the chance to meet, see and smell, with safety granted by the fence. Here below you can find their very first meeting. 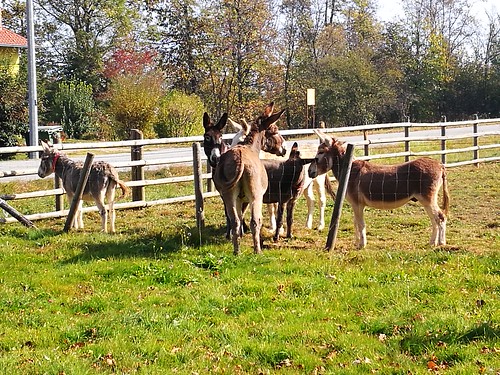 Curiosity did not last long and Ardito enjoyed the new field running, rolling and eating the fresh grass:

As you can see in the video below, when we opened the gate most of the donkeys were more interested in the paddock than in Ardito himself! Only the two bosses, Pippo and Galileo, spent hours around the new arrival.

We are aware that some fights may occur, as in donkeys' nature. So we're keeping an eye on the group, yet we'll let the donkeys to find a new balance.

Meanwhile, for Ardito this is gonna be the first night in other donkeys' company. We cannot know what he will be thinking about, but we know our thoughts: the tiny dark stable which was his prison for one year; the long road to recovery; his gentle spirit, which neither his hard past could take away from him.

Today we wrote a new chapter in Ardito's story and there is no measurement big enough to tell our joy. Please help us to write others, for our Gentle Giant Ardito and for other donkeys in need, who can count on us only. Ardito's story