Obi Wan, the hinny with neurological damages; Habiba and her foal Syd; Carmela, Giuliano and all the others. We promised it to the supporters of Il Rifugio degli Asinelli ONLUS and, most of all, we promised it to them, the donkeys, mules, hinnies and horses involved in the major equine seizure case ever happened in Italy: none of them will ever go back to Colleferro, the area between Rome and Frosinone widely spoken of as the horrors scene for hundreds of animals, abandoned and left starving.

The lawyer of Il Rifugio degli Asinelli, Gianpaolo Di Pietto, confirmed the news we all were waiting for: the divestiture agreement through which the over 200 animals, including the foals born from the pregnant female horses and donkeys, involved in the “Colleferro Seizure” has just been signed . After legal seizure, there’s an open door for their permanent adoption by those who have been taking care of them during these years.

A long and difficult case, “Colleferro Seizure”, that began almost three years ago with uncertain ending, between hope and fears: although all collected witnesses and evidence, the notification driven forward by Nuclei Antisofisticazione e Sanità (N.A.S.-Department of Carabinieri) and the Task Force of the Board of health was risking that nothing came of it, due to the advanced age of the accused, over eighties, and to alleged mental infirmity, which would have nullified the process.
In order to avoid this, which would have meant for hundreds of animals to go back to the same conditions from which they already managed to escape from death once, the Fondazione Il Rifugio degli Asinelli ONLUS asked lawyer Gianpaolo Di Pietto to proceed on another level directed to relatives and heirs of the accused: in accordance with Italian laws, in the case of crimes on behalf of someone unfit to plead, it is possible to claim damages to his relatives, since legally obliged to supervise him.

A winning move that convinced the accused to cede all involved animals. “We all wished to see the guilty ones held responsible for mistreatment, also as precedent for possible similar cases” states the Country Manager of Il Rifugio degli Asinelli Barbara Massa. “Though, considering that it could have ended differently, since the age of the accused and the alleged mental infirmity, we’re satisfied that at least the result was in the perspective of the involved animals’ welfare. The most important thing is that now a happy and peaceful life is ensured to over two hundred animals”.

Operations of “Colleferro Seizure” occurred in six different steps: the first one, in January 2013, after media communication spread by “Striscia la Notizia”, after years of reports made by citizens , with the joint participation of the task force of the Board of health, NAS, Forest Service, State Police and associations. Il Rifugio degli Asinelli ONLUS has always been in the frontiline, along with IHP Italian Horse Protection: countless the journeys of the volunteers and veterinaries from Piedmont and Tuscany, headquarters of the two bodies. ENPA and Legambiente have been involved also. 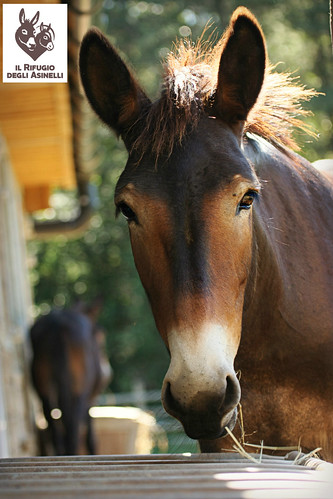 Further five steps followed (the sixth and last one after a precise year from the beginning of operations, in January 2014), on a land of hundreds of hectares among the districts of Colleferro, Segni, Valmontone, Gavignano and Paliano: operations made more difficult by the lack of people and facilities, by the continuous urgency, by psycho-physical animals’ conditions, with no financial aid from Institutions, Local Authorities and Prosecutors, but exclusively made possible thanks to the commitment of the associations and the generosity of people, who gave their availability to host the seized animals and their donations made possible the enormous expense coverage for food, veterinary treatments, transportation, custody staff, reimbursement to the owner of one of the two facilities in which the animals had temporarily been sheltered. The sole Rifugio degli Asinelli took directly care of 49 donkeys, mules and hinnies: 30 adults (of which 2 died after being rescued) and 9 foals born at Il Rifugio in Sala Biellese, 8 adults and 2 foals in the holding base in Abruzzo, born in order to have the chance to welcome such a huge number of seized animals.

“And precisely in consideration of the commitment and the number of living beings involved, my personal and enormous gratitude goes to my staff, for the hard work we had to deal with three years ago: everyone gave his own priceless contribution to give back life and dignity to the donkeys, mules and hinnies we rescued, to heal their wounds, both physical and mental” restates Barbara Massa. “And a likewise “thank you” to all supporters who, with their support, walked by our side during this adventure: encouragement emails, updates requests, offerings of hosting the involved animals, news sharing, donations. Without all these wonderful people, victory and a new life for hundreds of animals wouldn’t have been possible”.

Donate now to help us covering the expenses