A slight improvement this morning, after a very hard night; then, when we began to allow ourselves a little bit of optimism, the collapse, despite the care and presence of our vet. Elio, one of the "granny-donkeys" at our Rifugio, died today, just before noon, following a sudden, severe intestinal blockage that struck him yesterday.

Elio, born in 1993, was among the first donkeys to arrive at our shelter from Romania, where he had suffered a life of hardship and beatings. His character had been marked: scared of humans, he did not hesitate to use bites and kicks if he felt in danger. But this was many years ago. Because, as time passed and our cares nourished him, that shy donkey had blossomed.

Of course, he still used the kicks if something did not suit him and was still impossible to remove him from other donkeys' buckets, if he found some remnant of food. But he was also curious, affable, so intelligent that he quickly understood that not all people were a danger or an enemy.

Like other donkeys (first of all Agostino) who had been mistreated by adult men and did not trust them, Elio always loved children instead. He was one of the first "therapist" donkeys and his patience and sweetness with the little human Sandrina remain unforgettable. He was also one of the protagonists of Grooming Days and this moment, during the Summer Festival of 2016, will remain forever in the heart: 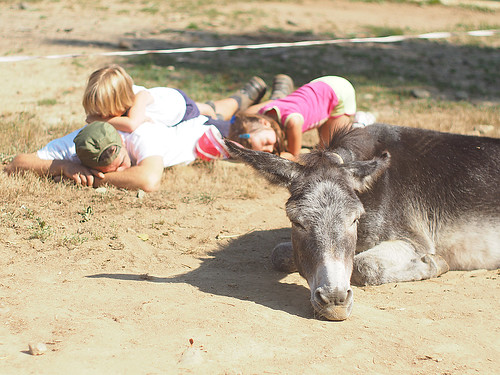 Since last year, Elio had been moved to the group of elderly donkeys. After donkey Luca's death, he become close friend with another Romanian granny, Tudor. But it was also a point of reference for all the young ones who live there, in the most peaceful and balanced herd of the whole Refuge (previously in the past he had been a "mentor" in Quasar). It was nice to see him snoozing next to Mimi, who had learned from him the pleasure of resting in the sun, as well as playing ball with Billy, in the snow.

All our old donkeys are delicate; they feel more than all the other guests the weight of the years and of the lives they have led or endured before arriving here at our Rifugio. The time they have is limited, but they do not know it or they do not care; they already live deeply every day in the best way possible, eating up to the last straw of hay or just the one they like best, picking up the rays when the sun is out, playing in the snow and then warming up under the infrared, coming to take a caress.

So we know that, sooner or later, we will have to say goodbye and maybe we will not even have time to do it; and because of this, every time, it is an unbelievable suffering to see them go away.

Elio looked like a rock, impossible to stop, indestructible. He was a donkey that went through life with firm hooves and straight ears, never losing courage and dignity. We are happy and proud to have been able to accompany him on this last piece of road.

Elio during a Grooming Day