To all the visitors, we said that her race, Poitou, was also called "donkey mammuth" and Fleur really looked like a timeless creature. Majestic and shy, with very long, tick hair that covered her dark and good eyes: she was one of a kind and it is very difficult to talk about it in the past. In one of the most painful periods for our Rifugio, after Vincenzino and Sogno, she left us too, after months of illness and every kind of treatment to try and help her.

We believed and tried until the last, because, despite the uninterrupted fever, the busted values ​​of liver and kidney, the need to pull her up in the morning because she could not stand up alone, we felt there was hope when we looked at her standing in the grass, under the sun.

Many of you have seen her, in the last weeks, in the paddock at the entrance of the Rifugio: thin, with the bands around the legs to support, alone, unfortunately, because when the diagnosis was uncertain and there was the possibility that it was a contagious pathology, we had to divide her from her partner Tigger. 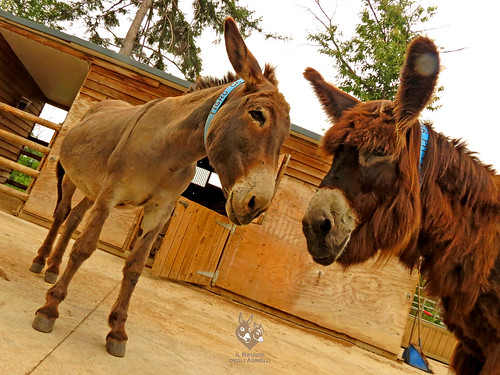 There have been so many ups and downs in these months. In the past few weeks her health conditions seemed stable and we hoped that her recovery could begin. But last Friday got worse again, she could not get up even with our help, the fight to breathe (a battle that she had always had to face) had become impossible. She left last Monday, helped by the vet.

We waited a few days to give you the news of her loss because, if it is painful to greet a friend, but having had to greet three in so little time is something intolerable. The first to know it were Penelope and her family, who for the last two years had adopted it exclusively with Tigro, and Madeleine and Hall, the couple who had made the report of a seriously injured donkey in the French countryside, from which the new life of Fleur would have started: people who loved her so much and allowed her to live beautiful years. Our thanks go to all of them. 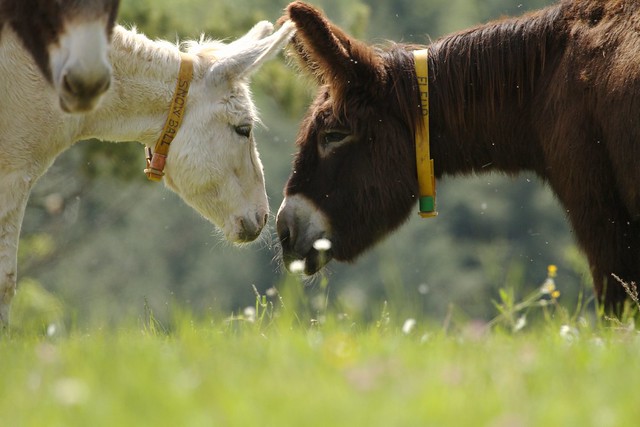 In 2014, to celebrate first 5 years of opening to public, we had chosen to tell the stories of some of our guests. We quote you Fleur's

Her face seems covered with velvet, iher long hair recalls ancient breeds like the Poitou donkey or the donkey of Miranda, her extra-large size does not prevent it from moving gracefully and approaching with extreme delicacy to the other donkeys and to people. Beauty is objective, but it is impossible not to find it in Fleur.

It was not always like this: when she was discovered by a couple of English people on holiday in France, she was abandoned to itself in the middle of the countryside, with half face disfigured by a huge sarcoid, a skin tumor. The couple contacted the Donkey Sanctuary, which had a temporary base in France; Fleur was treated and healed, at least in the body. The abandonment, the pain and the mistreatment suffered had left her a strong mistrust towards human beings and a sadness that did not want to leave behind her big dark eyes. She had come to hate herself and everything around her.

It was immediately clear to all of us, where she arrived at the beginning of 2010 along with four donkeys and the mule Marco, that big donkey, so majestic and yet delicate that at the same time, would need time to find peace. Luckily, she did: with so much patience, the friendship of the other donkeys and the affection of many people, from those who work at the Rifugio to visitors, who remain enchanted in the face of that ancient beauty. Now Fleur approaches the fence to be caressed, is affable and affectionate; she does not escape from her ghosts anymore. 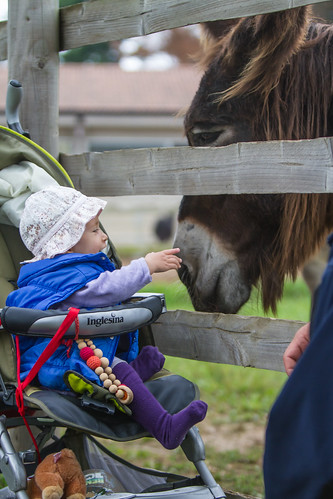